The German-American Olad Aden is a social worker, mental health therapist and DJ. After nearly ten years of professional experience working with mentally ill people and with “difficult” young people in Providence, Rhode Iceland, he moved to Berlin. Since 2003, he initiated there several hip hop projects, including GangwayBeatz and The Bronx Berlin Connection, which he uses as alternative education channels for young people from the so-called „problematic districts“. Besides being a street worker in 2010 Olad co-curated the project Translating Hip Hop at the House of World Cultures. He is still active as consultant and DJ.

Olad is responsible for the Music section of the project SPOKEN WOR:L:DS and for the workshops in Berlin and Nairobi. 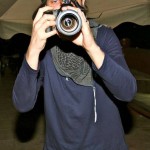 If CitéNOIR is not eating fried things, drawing comics, making music or reading texts aloud in Saiid’s bar, Olad probably takes him on a world tour to document it on film. Among others this has happened with the documentaries of the Bronx Berlin Connection 2011, Gangway Beatz Tour 2013 – Barcelona and Translating HipHop.

Citénoir documents the SPOKEN WOR:L:DS adventures in Nairobi and Berlin on film.

Isabel Ferrin-Aguirre (Berlin)
Isabel studied Spanish, English, Italian Literature in Berlin, in Salamanca/ Spain, and Cagliari/ Italy before she started working as cultural manager at the Poetry Festival Berlin (Literaturwerkstatt) in 2005. She collaborated with the international and multilingual poetry platformlyrikline.org. Together with Xiao Kaiyu (China) and Phillippa Yaa de Villiers (South Africa), she edited the Publication “No Serenity Here: an Anthology of African Poetry in Amharic, English, French, Arabic and Portuguese” (Peking 2010). She has organized events such as Translating Hip Hop at Haus der Kulturen der Welt, and was in charge of the German edition of the internationally renowned project “Poetry Bombing / Poetry Rain“ by the Chilean group Casagrande which launched 100.000 poems over the Lustgarten in Berlin.

She is the curator and coordinator of the project SPOKEN WOR:L:DS and conducts the workshops in Berlin and Nairobi.

Wanjeri is a creative writer and print journalist. The former Associate Editor at UP, a Nairobi-based arts & culture and urban lifestyle magazine, now works now as a freelancer, plying her trade for brands such as DSTV Online, Eat Out Kenya, Home & Living Magazine and M-Net. @Mawazo_Mengi is also a passionate tweep who blogs at www.wanjeri.com.

Wanjeri is responsible for public relations during the project SPOKEN WOR:L:DS in Nairobi.

Anna has studied Philosophy and African Studies in Berlin with research stays in Ghana, Tanzania and Kenya. She focused on Kiswahili and contemporary African literatures. She is currently working on a research project on contemporary performance poetry in Nairobi. Anna has curated and organized numerous cultural and literary programmes, among others LIFELINES with and dedicated to the Somali writer Nuruddin Farah at the Haus der Kulturen der Welt, Berlin.

Anna advises the project SPOKEN WOR:L:DS as an expert in East African literatures and cultures and is responsible for the programme and public relations in Nairobi.

Billy Kahora (Nairobi)
Billy is Managing Editor of Kwani Trust and has edited 7 issues of the Kwani? journal and other Kwani? publications including Nairobi 24 and Kenya Burning. He is also an Associate Editor with the Chimurenga Chronic. Billy is a past recipient of the Chevening Scholarship and an Iowa Writer’s Fellowship. He has an M.Sc Creative Writing from University of Edinburgh, U.K and a BA in Journalism from Rhodes University, South Africa. He was a judge of the 2009 Commonwealth Writers’ Prize and 2012 Commonwealth Short Story Prize. He is also a judge for the new Etisalat prize based in Nigeria.
He has written a non-fiction novella The True Story Of David Munyakei and his work has appeared in Chimurenga, Mc Sweeney’s, Granta Online, Internazionale and Vanity Fair. He wrote the screenplay for Soul Boy and co-wrote Nairobi Half Life. He was highly commended by the 2007 Caine Prize judges for his story ‘Treadmill Love’ and his story ‘Urban Zoning’ was shortlisted for the prize in 2012. He is working on a novel titled The Applications.

Billy advises the project SPOKEN WOR:L:DS and is jointly responsible for the programme in Nairobi.

MC Kah is a rap-artist and a community organiser from Dandora/Nairobi. He formed his first rap group Warogi Wawili in 1998 and produced his first single ‘Mpaka Saa Ngapi’ in 1999. In 2001 he launched his solo career and started working on his debut album simultaneously working for a community project in Dandora. In 2003 he released Dandora Love, and in 2004 Kilio Cha Haki, a compilation album featuring 38 rap artists from the Eastlands of Nairobi that took him to perform in France and the Netherlands.
MC Kah and his crew won the annual Kisima music award for the best hip-hop group of the year in 2005 and 2006. He worked with rap artists like Ukooflani Mau Mau (Kenya), Rha Goddess (USA) and Didier Awadi (Senegal). His poetry was published in the literature journal Kwani?. MC Kah is also helping in the running of the Maono cultural group, which is a community project for youth involved in activities like football, acrobats, dance, capoeira as well as music and other arts. He is the chairman of Rekebisho, an international N.G.O dealing with development of ghetto youth.

MC Kah is responsible for the music and educational section of the project SPOKEN WOR:L:DS in Nairobi.

holds a PhD in French literature and is a visiting profesor at the Berlin University of the Arts. She taught French and Media Studies at Universities in Düsseldorf and Berlin from 1996-2004. During her research on the urban aesthetics of Hip Hop she was a visiting fellow at Columbia University (New York) from 2005-2007. She was head of the Humanities and Literature Department at the Haus der Kulturen der Welt in Berlin from 2008-2011 where she co-curated Translating Hip Hop. Susanne publishes on migration, culture and globalization, culture and climate change and is a literary critic.

She is thecurator of SPOKEN WOR:L:DS and responsible for the project in Berlin.